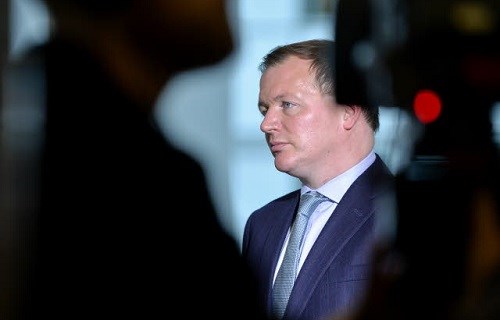 By Stine Alvad
At a summit held in the European Parliament, a coalition of FIFA critics and presidential aspirants argued that an independently overseen ’FIFA Reform Committee’ must be established.

On 21 January, the European Parliament in Brussels hosted the first summit of a new coalition of FIFA critics, called ‘New FIFA Now’, who laid forward their ideas for changes in the international football federation, FIFA.

To support this change in FIFA, British MP Damian Collins, who took the initiative to the summit, had gathered a group of people, most of whom have a substantial knowledge of sports governance, proven track record in football administration, and all with a wish to change the way world football is governed today.

The summit saw presentations from people like FIFA presidential candidate Jérôme Champagne, FIFA whistleblower Bonita Mersiades, Jaimie Fuller, chairman of SKINS and an advocate for better ethics in sport, and former FIFA official Harold Mayne-Nicholls who is also considering to throw in a bid in the FIFA presidential race.

Moreover, several politicians from the European Parliament were present on the podium and among the around 120 attendees: Co-host Emma McClarkin from the UK, Ivo Belet from Belgium and his compatriot, the new chairman of the parliament’s Intergroup on Sport, Marc Tarabella, among others-

In the communique from the summit, the organisers  call for the establishment of a ‘FIFA Reform Committee’. This reform committee should be overseen by an independent international authority, suggests ‘New FIFA Now’ and mentions UNESCO as a possibility.

With a basis in the coalition’s charter for change in FIFA, this new reform committee should:

The group has also drawn up a set of guiding principles that outlines initiatives that could improve democracy, transparency and accountability within FIFA. The ten guiding principles should work as “a framework for discussion and consultation around the FIFA Reform Committee”.

Play the Game’s international director Jens Sejer Andersen was present in Brussels and while he appreciates the goal of this new group and shares their wish for a change in FIFA, he hopes “New FIFA Now” will consider previous work in the field of sports governance:

“Too much time will be wasted if a new committee should review FIFA’s governance from scratch. Transparency International as well as Mark Pieth and his FIFA governance committee have done a thorough analysis already, and the main problem was not the substance that the latter group gave, but that FIFA chose to disregard most of it. Also the Action for Good Governance in International Sports Organisations (AGGIS) has provided the theoretical basis and practical tools for reform,” says Andersen who sees a complementary role for the “New FIFA Now” group:

“It is very encouraging that high-ranking representatives of politics and business commit to create change in football. There are many unexploited opportunities in mobilising politicians and sponsors worldwide to push for more transparency and less corruption in football and other profitable sports. There is a momentum in world politics these days that ‘New FIFA Now’ can hopefully make use of.”

Anyone wishing to support the 'New FIFA Now' campaign can do so by signing a petition launched on the campaign's website.