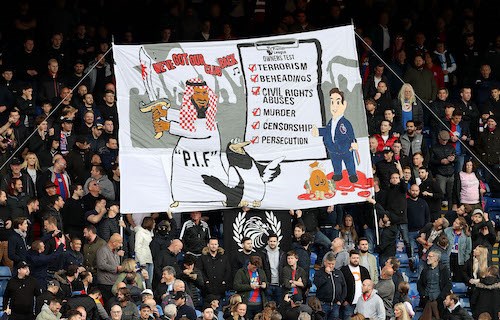 Fans of Crystal Palace indicated their demand for an owner's test in their own way at a match shortly after Newcastle United was taken over by new owners from Saudia Arabia in October 2021. Photo: Charlotte Wilson/Getty Images

By Steve Menary
Professional football clubs in Europe are getting new owners at an increasing speed. However, only a handful of European countries try to regulate club ownership and the focus is mainly financial. Steve Menary outlines the state of affairs on tests of club owners and directors.

In what could pass for a new version of the popular board game Monopoly, Europe’s football clubs are being bought and sold with increasing regularity. Since the start of the 2021/22 season, barely a week has passed without ownership of a professional club changing hands.

Some acquisitions, such as the purchase of English Premier League club Newcastle United by an arm of the Saudi Arabian government, dominated global media headlines; others barely registered outside their own country. At the same time only a handful of European countries try to regulate club ownership.

The Newcastle deal was widely criticised by human rights groups, but the takeover was waived through on October 7 2021 despite the existence of an Owners & Director’s Test in England that is supposed to vet new owners.

New test for club owners on the way in English football
The test has for years been widely criticised for being ineffective after failing to prevent a host of problems including the demise of professional clubs like Bury and Macclesfield. Six weeks after the Newcastle deal was agreed, a fan-led review of football governance proposed an independent regulator that would oversee a stronger test for club owners in English football.

The new system would involve a business plan review, a check of financial resources, enhanced due diligence on the source of those resources, and an integrity test based on existing assessments developed by the UK Financial Conduct Authority, Prudential Regulation Authority, Ofcom, and the Home Office.

The test will include a ‘good character and relationship aspect’ but has to be approved by the UK House of Parliament and whether the new legislation could block a sale similar to the Newcastle take-over remains to be seen.

“It’s better than the current system, but anything about human rights concerns is missing,” says Niall Couper, chief executive officer of the pressure group Fair Game, which includes 34 clubs looking to change the way the game is run.

“There are some clubs that are opposed to the proposal, but others have spoken to us off the record and  support the idea as it will bring proper scrutiny of the owners and a directors test. It could make the UK a more appealing place to invest,” says Couper.

The test, which would apply to anyone buying 25% or more of a club, would also apply to proposed new directors, with a due diligence element developed in tandem with the Home Office and the National Crime Agency, but whether this would have prevented the Saudi takeover of Newcastle is unclear.

“How do you prevent what happened at Newcastle?” says Martin Endemann, senior project manager at Football Supporters Europe. “It’s not a question of stability. Providing they don’t get relegated, they are probably the most financially stable club in the world but there are moral issues.”

“We at FSE welcome any rules that make it difficult for dodgy operators or states to own football clubs, but that’s where it becomes difficult.”

If approved by the UK parliament, the proposals could come into force for the 2023/24 season and, despite the concerns over lack of focus on human rights, may make England a pioneer in regulating club ownership.

French rules are a deterrent to unsuitable owners
In France, the Direction Nationale du Contrôle de Gestion (DNCG) was formed in 1990 after 14 clubs had become insolvent in the three previous years. Since 2017, the DNCG has required owners to provide financial guarantees that they have the resources to run a club for a year.

The DNCG cannot block a takeover, but failure to comply can incur fines up to €250,000 and exclusion from cup competitions. Clubs not deemed by the DNCG to have sufficient backing can have their professional licence removed and face relegation to the regional leagues. In recent years, at least nine clubs including Bastia, Cannes, Grenoble, Le Mans, and Strasbourg have been demoted after falling foul of the DNCG.

“There are investors looking to invest in French clubs as they are probably amongst the cheapest in the big five leagues,” says Jean-Francois Merdrignac, an associate specialising in intellectual property at the French office of global lawyers, Linklaters. “The DNCG rules keep clubs in France cautious about their finances.”

These rules can also be an effective deterrent to unsuitable owners. In 2019, the London Football Exchange proposed a takeover of Nantes, but the crypto currency group did not even arrange a meeting with the DNCG to discuss their finances and the takeover did not happen.

Know Your Owner test established in the Netherlands in 2018
In the Netherlands, the Know Your Owner test was also developed by the local federation, the KNVB, after a bad experience. A decade ago, Dutch club Vitesse Arnhem was acquired by Georgian businessman Merab Jordania, but allegations persisted that the deal was engineered by Chelsea owner Roman Abramovich. This would have breached the KNVB’s rules on multi club ownership that were in effect at that time.

Know Your Owner came into force in 2018 ahead of Dutch rules on club ownership being relaxed and applies to anyone buying 25% or more of a Dutch club. The emphasis – and cost – lies with the prospective buyer to meet the rules, which are derived from the financial industry.

Few Dutch clubs are owned by foreign groups, but that is now changing with Den Bosch and Den Hague bought last year by overseas investors.

In neighbouring Belgium, there are no quotas on non-EU players and the country’s clubs are a target for overseas investors who already own bigger clubs elsewhere and look to buy Belgian sides and loan players to what are in effect feeder clubs

With the recent acquisition of RWD Molenbeek by US businessman John Textor, seven of the eight clubs in Belgium’s second tier 1BProLeague are now foreign owned. Including the top tier Jupiler League, 16 out of Belgium’s top 26 clubs have overseas owners.

Some sources suggest that Know Your Owner could be introduced in Belgium, but the Belgian football federation claims the existing rules are sufficient.

In a statement, a spokesperson says: ”New club shareholders/owners are screened by the Belgian Football Federation and clubs are required to provide information allowing, among other things, to identify the ultimate beneficial owner.”

Malta under pressure to vet new owners
The Belgian approach is also supported by new national rules on combating money laundering, which came into force in July 2021. This is also influencing plans to vet club ownership in Malta, where the local football association, the MFA, is pushing ahead with structural changes.

The status of Maltese clubs is being changed from membership organisations into companies that can be bought by investors. To support this, the MFA is developing a system to vet new owners before the changes come into effect in 2023.

President Bjorn Vassallo, a former director of Europe at FIFA, explains: “We need to safeguard whoever is a good person or a good administrator by putting in these layers of safeguards.”

A crucial driver behind the introduction of this new owners test was Malta being placed on the Financial Action Task Force’s list of ‘grey’ economies‘ in June 2021.  The FATF is an intergovernmental body that serves as a watchdog over global money laundering and terrorist financing, and it believes that Malta is at a ‘higher risk of money laundering and terrorism financing’. The increased monitoring of financial transactions is having a huge impact on all aspects of the Maltese economy including football.

Best model may be fan ownership
Outside of the EU, particularly in Eastern Europe, the idea of preventing or monitoring new money being injected into football is anathema to many football associations. There is often so little investment in clubs in poorer football economies that some associations privately believe that placing restraints on investors – regardless of their background – could cripple clubs.

Alex Phillips, former head of governance at UEFA, says this argument is “not defensible.” He adds:

“Football clubs existed before dodgy money. Clubs are community assets and in the UK they generally own their own stadiums, so they don’t need new investment as that is only to service consumption on players wages and transfers. Virtually all the investors that have recently come from outside of football will be gone in five, 10, 15 or 30 years. Ownership is just a lease, and they will eventually sell out.”

Phillips tacitly supports the new English proposals, in particular the need to identify the ultimate beneficial owner but says that the best system – at present – lies in Germany, where fans own the controlling stake in clubs.

He adds: “If fans have the majority of the voting rights, this is the best option to limit the problem of owners who are bad for football. It’s not perfect, but it’s the best there is. By its very nature, it prevents a bad owner from taking full control of the voting rights and looks after the long-term interests of the club.”

In Spain, four  clubs – Athletic Bilbao, Barcelona, Osasuna, and Real Madrid – are still owned by their membership although fans are represented by a president, who can wield great power, such as Florentino Rodríguez at Real.

Phillips advocates allowing properly constituted supporters trusts should be permitted to purchase up to 0.5% of a club’s shares on an annual basis.

“Trusts should not take dividends, but they would start to gain more control of the voting rights,” says Phillips who admits that this could be a long process at some of the continents bigger clubs.

Supporters trusts have resurrected some failed clubs often only to be bought out later but the collapse of SC Bastia in 2017 led to an innovative new form of club ownership in France.

The Société Commerciale avec pour objet l'Intérêt Collectif is a commercial company with shareholders including private companies and supporters with a mission of collective interest. Bastia have regained their professional licence after returning to Ligue 2 and the success of SCIC is still being evaluated.

With Europe’s football clubs now in their third season disrupted by the Covid-19 pandemic, buy-outs by private investors look set to continue apace, and for supporter groups tired of seeing community assets traded with such regularity, addressing club ownership has never been more necessary.

Loukas Anastasiadis, membership development manager at Supporters Direct, says: “These people do not want regulation, but you can’t be entirely free or entirely regulated. You need to be somewhere in the middle.”

Those investors looking to take control of clubs are likely to disagree and, at present, many football authorities do not appear to have the appetite or power to address regulating club takeovers or ownership.