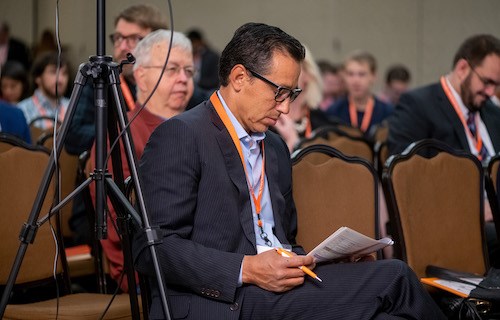 The programme for Play the Game 2022 is just as extensive as in previous editions of the conference. Photo: Thomas Søndergaard/Play the Game

By Play the Game
The detailed programme for Play the Game 2022 in Odense, Denmark, is now ready and you can still register with discount for the event that takes place at a crucial point in international sports politics.

When several hundred international journalists, academics, sport leaders, athletes and others with an interest in international sports politics convene in Odense for the 2022 edition of Play the Game, it happens at a dramatic turning point in sports politics. After a major doping scandal and the invasion in Ukraine, Russia's power in sport is shrinking, and the question of who and what will fill the power gap left behind will be prominent on the conference’s agenda.

“The question is whether China or other authoritarian states from the Middle East will step up, or if we have a unique opportunity to build a stronger link between sport and human rights,” says Jens Sejer Andersen, international director of Play the Game.

The issue of sport and human rights will be addressed from the very beginning of the conference with a debate that asks whether international sport has managed to influence Qatar to improve human rights in the country in the run-up to this year’s world cup in football. Another debate on the opening day will take a closer look at the sports political landscape after Russia’s loss of influence in international sports politics.

From showcasing problems to finding solutions
More than 150 speakers have signed up for this year’s conference that also marks the 25th anniversary of Play the Game. During that time Play the Game has moved from being a ‘home for the homeless questions in sport’ to becoming a widely recognised forum for open, independent and factual debates on a range of key problems within international sport.

“Earlier Play the Game conferences often showcased and documented the issues that international sports organisations were not addressing, but many taboos have been broken over the past decade. Now our role is also to facilitate debates on how to solve the problems that are finally acknowledged. However, there is still a need for a place where the suppressed voices and whistleblowers in sport can speak out,” says Jens Sejer Andersen.

Therefore, the programme for this conference will range from classic Play the Game themes related to doping, corruption, and crime to new themes such as the need for a reform of the international Court of Arbitration for Sport and the role of the sports sector in responding to the climate crisis.

Once again, the conference has managed to attract speakers with expert knowledge and ability to influence the decisions that are made in the world of sport. The full speaker’s list is long and includes names such as

Find out more about Play the Game 2022

Join the Sport and Society Research Network conference with a discount - 08.03.2022