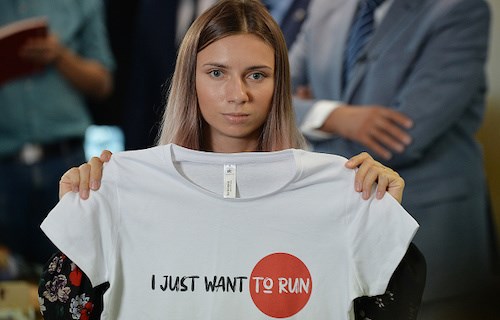 Belarusian athlete Krystsina Tsimanouskaya was denied further participation in the Olympic Games in Tokyo by the Court of Arbitration for Sport after she complained about her coaches. Photo: Alexei Pantsikov/Getty Images

By Grit Hartmann
According to a new survey conducted by Play the Game, athletes have largely lost confidence in the Court of Arbitration for Sport (CAS). They do not consider the CAS to be "independent" and "impartial", but rather an extension of the sports federations, where proceedings drag on irregularly and they are financially disadvantaged.

It is fairly easy to date when an athlete representative body, at least one affiliated to the sports system, first spoke out about the Court of Arbitration for Sport. The unusual incident happened in August 2017 when the World Anti-Doping Agency’s Athletes’ Committee met in London and afterwards publicly scolded the sports judiciary. The CAS should “improve and strengthen its independence”, it said in the minutes of the meeting, “and continually strive to increase the quality of its arbitrators.”

The criticism was a comment on some strange CAS awards in the Russian doping saga, and reportedly it led to quite a bit of outrage from IOC top brass to the point of demanding that the remarks on the CAS should be removed from the minutes. That, of course, did not happen. Yet, it is noticeable that since then athletes’ representatives of the sports governing bodies have treaded more lightly on the CAS.

Sports exceptionalism or despotism?
According to the figures available, athletes are not particularly successful before the sports “court”. They are the weaker party if only because the CAS applies the rules of the federations, which have rarely been drafted with athletes' input or their rights in mind.

Moreover, numerous norms and special principles that apply exclusively in sports and have been confirmed by the CAS, deprive athletes of rights that are otherwise guaranteed under legal norms. The most infamous example is the concept of “strict liability” for doping offences, which provides for sanctions without fault and runs counter to society’s basic notions of fairness. Yet it can be seen as necessary for a level playing field.

The same can hardly be said of other rules that deprive athletes of their intellectual and commercial freedom and that apply, for example, at the Olympic Games. Other rules are specifically tailored to individual sports and owe their existence to monopoly regulators in the international federations. Even if those rules sometimes reflect the despotism of all-powerful sporting lords, they are amenable to sanctions and can have serious economic consequences for athletes.

Take for instance the longstanding ban on hijabs by the International Basketball Federation, the headgear that allegedly posed a danger to players. As long as this was the rule, there was no enforceable justice for female players who had to miss competitions because of it.

Certainly, there are unique elements in sport that require a different legal treatment and exemptions from national laws. The key question, however, is: How far should sports rulers be allowed to go, when sacrificing athletes’ rights supposedly to the needs of transnational harmonisation of sport­ing activity?

Survey: a yes to arbitration, a no to the CAS
Arguably, the CAS should work as an independent counter-power to the authority exercised by the sporting conglomerate. Is it by any means suited to safeguard the rights of the athletes?

The athletes’ response amounts to a resounding vote of no confidence in the sports justice system when they were asked to participate in a survey conducted by Play the Game. The CAS is the “court” that athletes do not trust - even though a majority believes that sports arbitration is the right forum to resolve disputes rather than taking their cases to the state courts. Just not the CAS.

This lack of trust was the main finding of the survey among twelve independent athlete organisations, representing several hundreds of thousands of professional athletes. Among them are unions active for many years as well as recently established associations who broke free from their international federations or National Olympic Committees.

Two thirds of the athletes’ representatives, for example, do not see impartiality and independence guaranteed at the CAS, the other third is only “somewhat confident” in this respect. More specifically, there is a strong conviction that proceedings at the CAS lack legitimacy due to the lack of independent arbitrators – all organisations consider this to be “a major problem” or “a problem”.

Among the most urgent governance reforms for the CAS that Play the Game asked about, there is one distinct priority: “The president of the ICAS must not be a sports official but a neutral without links to a sports governing body.” The president of the International Council of Arbitration for Sport, the foundation that supposedly oversees the sports “court”, has been John Coates, the IOC vice president, for ten years.

The vote illustrates how closely the athletes’ distrust in sports arbitration is linked to the core structural flaw of the CAS: To have their sport governed by a private club that is both legislator and judge and accountable to no one for far-reaching decisions has obviously become untenable for athletes.

The widespread unease is exacerbated by the fact that athletes hardly have a say in the composition of the CAS. Only one of the independent athlete organisations has ever been asked to propose arbitrators for the CAS list. Structurally, the scales of justice not only tilt in favour of the sports bosses, but they stay there without tipping.

It should also be mentioned that athletes do not perceive the CAS as an institution that is up to the task of dealing with human rights issues in sport. That applies also for the large footprints, sports federations leave in host countries with their mega-events.

Rarely fast and rarely low-cost
The fact that the reputation and acceptance of the sports “court” are extremely low among athletes is also due to the fact that the CAS regularly fails to comply with what arbitration should actually stand for: fast and low-cost dispute resolution.

This does not correspond to the athletes' experience, as the Play the Game survey also revealed. Rather, the German saying that you need three bags in court - one with paper, one with money and one with patience – seems to be true for the CAS.

The CAS sometimes takes almost a year to decide a case, rather than the 90 days it states in its Code. That alone can ruin athletes, for example in doping cases, when they are deprived of their livelihood due to a possibly unfounded ban. One athlete comments on the duration of CAS proceedings: “If an athlete delayed any notification … they would be held severely liable and never excused. Yet the powers that be are seemingly able to do whatever they want and get away with whatever they want.”

According to Play the Game's contacts, however, it is often not the arbitrators who are responsible for the delays, but the Court Office.

The high costs of CAS proceedings are often complained about, mostly by affected athletes, but they are usually dismissed with reference to the legal aid system that the CAS offers to individual litigants. Not much is known about this legal aid, which is why Play the Game took a closer look.

In 2020, for example, roughly every tenth case at the CAS involved a legal aid application. Out of 91 applications, 21 were granted in full. A commission headed by CAS President John Coates gives the thumbs up or thumbs down.

The “guidelines” for legal aid are not particularly clear. A recent CAS case, of Portuguese cyclist André Cardoso, is more telling. The case shows that the “help” is not necessarily helpful, but rather serves to weaken the athletes’ performance before the CAS. An appeal to the Swiss federal judges has just failed. Therefore, the question of whether the CAS’ legal aid system is suitable to guarantee athletes a fair trial is likely to be tried before the European Court of Human Rights in the near future.

Read the full investigation into the Court of Arbitration for Sport

This article introduces a key theme in investigative reporter Grit Hartmann’s report into the Court of Arbitration for Sport ‘Tipping the scales of justice – the sport and its “Supreme Court”.´

The report is published by Play the Game and takes a behind-the-scenes look at the CAS: at its composition, the balance of power, mechanisms within the institution, and at patterns that, although largely hidden from public awareness, could influence sports jurisprudence. A second part deals with the situation of athletes before the CAS and their concerns.