Will Putin's arenas turn out to be Potemkin villages? 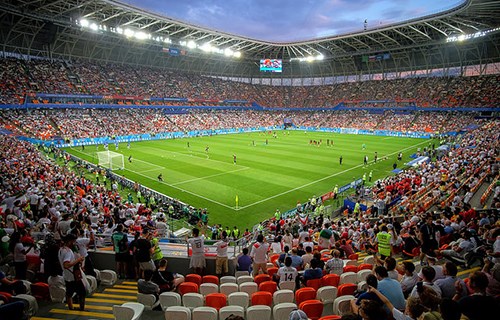 By Matthias Fett , Helmut-Schmidt-University in Hamburg
Analysis: The recent World Cup in football was named “the best ever” by the FIFA President. But from an economic point of view, its legacy is questionable. The investments surpassing 25 billion USD may turn out to be highly disproportionate to the benefits. Economist Matthias Fett looks at the numbers.

This year’s FIFA World Cup ended inside the Luzhniki-Stadium, in a way not even screenwriters could imagine. The only person who was protected from the heavy rain, was the patron himself. This image inevitably fits in with the impression one has had of the biggest sporting event of the year in the previous four weeks. Instead of games, goals and superstars almost everything, whether intentional or not, revolved around Russian President Vladimir Putin.

Since taking office, Putin has had the goal, “to make Russia great again”. This goal was first attempted to be fulfilled through “soft power”, the sport. Not only did he send friends and associates at the head of international sport-governing bodies – a famous example is Vitali Mutko, current Deputy Prime Minister and former Minister of Sport, who in 2010 was a member of FIFA’s Executive Committee, which decided on the awarding of World Cups to Russia and Qatar. Next step was to bring major international sport-events back to Russia.

The first showpiece of this successful strategy was hosting the 2014 Winter Olympic Games in Sochi. The seaside resort on the Black Sea and Putin's summer residence was subjected to gigantic reconstruction measures and rebuilt into the scene of the Winter Games. Costs: approximately 50 billion USD.

These games were not only the most expensive Winter Games, but also generally the most expensive Olympics in history. In addition to the Olympic venues (such as the Olympic Stadium, Media Center and Olympic Village), a Formula 1 race track was built for another 195 million USD. Since 2014, the track has hosted the Russian Grand Prix, so at least for this project a long-term use is guaranteed.

The Olympic Stadium of Sochi (Fisht-Stadium) was also used for the 2018 FIFA World Cup. In order to comply with the FIFA regulations, the stadium had to be remodeled (at an extra cost of about 63.5 million USD), bringing the total cost to 787 million USD.

By contrast, ten of the other eleven stadiums cost significantly less (see table 1). The new national stadium, the Luzhniki Stadium in Moscow, cost about 467 million USD and has marked both the beginning and the end of the tournament.

The reason for this cost explosion and a construction period of eleven years is not an extravagant architecture. Rather, the arena has become a symbol of corruption and mismanagement. Thus, the construction costs are out of all proportion to the labor costs for workers from Uzbekistan, Kyrgyzstan or North Korea. According to Human Rights Watch some of these workers were even partially unpaid.

But the costs are in line with other mega-projects such as the new headquarters of Gazprom in St. Petersburg, the 462 meters high Lakhta Center, Europe's tallest skyscraper, which was also completed on time for the World Cup and whose costs are also in the nine-figure range. And even if Gazprom takes over the cost, this project represents another huge economic burden for the city of St. Petersburg.

Investments in infrastructure
In addition to the costs for venues there are other costs for the host of mega sports events. A renovated or new stadium alone is not enough, but also requires the appropriate infrastructure: airports, rails or roads. The Moscow airports were modernized while others were rebuilt. Over 30 new train stations were built and roads were refurbished. According to Moody’s, costs in this area were about 10.8 billion USD.

Another cost factor which has played an important role, at least since the attacks in Paris on 15 November 2015, is security. Expenditures for security at Sochi 2014 were just under 1.6 billion USD. Even if no figures are available for this area yet, it can be assumed that the actual expenses will be significantly higher for eleven World Cup sites and further 32 training camps. Not only international terrorism posed a threat, but also anti-Russian motivated assassins were to be feared.

In addition, due to the bloody attacks of Russian hooligans in France in 2016, protection of foreign fans became a top priority. As a precautionary measure, a demonstration ban in all host cities was imposed to prevent opposition protests. An anti-democratic measure, which also had to be controlled by numerous policemen. FIFA can only ensure safety within the stadia. The costs in this area are therefore estimated to reach 11 billion USD for all eleven cities (1).

In the figures published to date on the costs of the World Cup, neither these security costs nor follow-up costs are included.

The risk of white elephants
At least since the turn of the millennium, a topic that negatively dominates the aftermath of major sporting events is “white elephants” – stadiums that are seldom or never used after the event. This phenomenon is visible for stadiums in Asia, South Africa and Brazil.

Russia is trying to counteract this fate with various measures. After the World Cup, they plan to dismantle the stands of the Ekaterinburg Arena and reduce the capacity – at a further substantial cost. A football team from St. Petersburg is forcibly relocated to the Fisht Stadium in Sochi to play first division football. An idea that will affect other similarly empty arenas.

The Fisht Stadium furthermore faces another problem. Due to the newly built port and the corresponding intervention in nature, rock is being washed away into the bay, so there is a risk that the stadium, including the promenade, will be undermined in the coming years. So here one can certainly count on further tens or even hundreds of millions of dollars in maintenance costs for the next few years.

If you sum up all the factors, you quickly reach a cost dimension of more than 25 billion USD for this World Cup, in which the Russian state invested at least 70%: 5.0 billion USD (venues) + 10.8 billion USD (infrastructure) + 11 billion USD (security) + ‘legacy costs’.

It is therefore the most expensive World Cup in history (see table 2).

Own calculations from various sources. *Current value US-Dollar (July 2018). ** tournament expenditure only, because of no new stadiums and no further investments into new infrastructure.

The possible benefits
Wherever there are expenses, there should be revenue as well. Russia has been in a severe economic crisis since the sanctions due to the annexation of Crimea. The Russian ruble lost value and increased the price of various products and, as a result, stadia construction. Only since the oil price has increased significantly in 2017, could the commodity-exporting country recover.

The Russian government claims that these gains in GDP are attributed to the World Cup, although a distinction is still difficult to make at this point in time. Historically, after 1990, World Cup tournaments have also led to increases in economic output, but there is a gap in volume between emerging economies and developed nations. Possible reasons can be a constantly refurbished infrastructure, better league performances or more privatization of construction projects.

Another way the Russian government has chosen to strengthen the economy is through economic reform. One of them was announced on the opening day of the World Cup: a pension reform. The retirement age was increased to 65 years for men and 63 years for women. Although this conversion is due to the demographics, it aroused the displeasure of the population. Because of the above-mentioned demonstration bans in major cities, the opportunity for public protest was scarce.

In addition, it was announced that VAT will be increased from the current 18% to 20%. This automatically leads to a raise in price of products and thus to a reduction in the purchasing power. Here, however, the question may be asked why this VAT increase had not already been implemented before the World Cup so Russia could have benefitted from the influx of tourists. Foreign fans are generally more generous and could thus have provided more tax revenue. Despite these unpleasant measures, the government hopes to generate additional revenues of around 9.3 billion USD annually.

Thus, from an economic point of view, the conclusion of the "best World Cup ever" (according to FIFA President Infantino) is less positive. The cost of at least 25 billion USD is disproportionate to the tournament's estimated FIFA revenue (6.5 billion USD over a four-year period).

The unchanged or even worsened foreign and domestic situation of Russia attracts neither foreign direct investment nor new tourists in the country. At best, the expensively renovated infrastructure could lead to a stable growth path in the long run. And the surprising success of the national team can spark enthusiasm within the country, so that the stadiums, temporarily, do not get completely abandoned. In the end, Putin's arenas may turn out to be the famous Potemkin villages.

(1) As an optimistic estimation. Taking the official numbers of the Winter Olympics, there have been security costs of 95.43 million USD per day. For 32 days of the World Cup, it would mean 33.59 billion USD in total or 3.06 billion USD for each host city. Because there are host cities with less occupancy than 32, a day-by-day-calculation would then lead to: 22.33 billion USD. However, to avoid an overestimation, 50% is assumed.

Matthias Fett is an economist at the Chair of Constitutional Economics of the Helmut-Schmidt-University in Hamburg. In his dissertation, he studies how mega sports events like the FIFA World Cup or Olympic Games affect the host country’s economy.