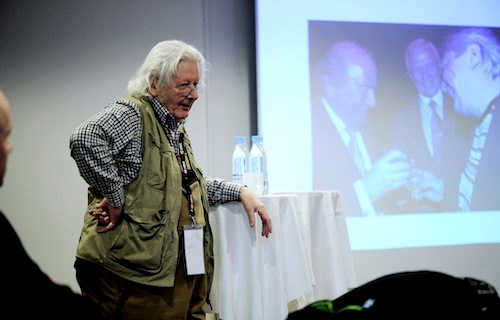 Investigative journalist Andrew Jennings discusses his investigations of FIFA at the Play the Game 2013 conference. Photo: Thomas Søndergaard/Play the Game

By Kirsten Sparre
53 authors from 17 different countries have contributed to a special issue of the magazine ‘Sports & Politics’ about the life and journalism of Andrew Jennings who passed away earlier this year. At the same time, the magazine provides a fascinating insight into the rise of journalism about sports politics over the past 30 years.

In 2011, investigative journalists Andrew Jennings and Jens Weinreich received the Play the Game Award for their work on ‘documenting and bringing the enormous levels of mismanagement and corruption in the world’s leading sports organisations into public view’, as the nomination read.

It was fitting that the two got the award together. They were close colleagues and friends, and when Jennings died at the age of 78 in January 2022, Weinreich mobilised their shared network of journalists, academics, and sport leaders – friends as well as a few foes – to contribute within a few short weeks to a major written tribute to a man who everyone agrees was a formidable journalist and force for change in the world of sports governance.

The tribute is published in the form of an 81 pages long special issue of Weinreich’s magazine ‘Sport and Politics’ with texts by 53 authors from 17 different countries. 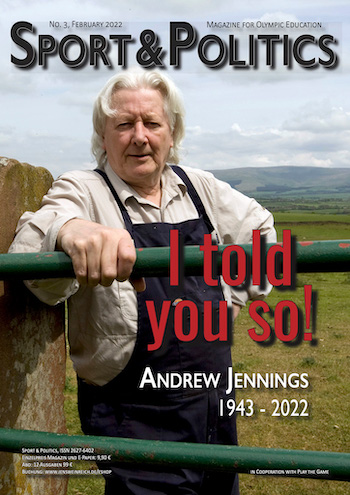 The cover of the special issue of 'Sport & Politics'

The intention has not been to produce an exhaustive account of Jennings work, writes Weinreich in his editorial, but he believes that anyone who wants to understand the revolution in investigative sports politics reporting  and the significance of Andrew Jennings over the 30 years that have passed since the publication of ‘The Lord of the Rings’ by Jennings and co-author Vyv Simson should read the texts carefully: “More than 50 pieces of the puzzle fit together to form a great whole.”

The pieces not only form a whole, but it is also a multidimensional puzzle, Weinreich has put together with the help from people who knew Jennings well and admired him as well as people who had been on the receiving end of his journalistic attention such as former FIFA president Sepp Blatter.

“With his books and articles, he held up a mirror to us – and even if I disagree with much of what he wrote, I take my hat off to him,” writes Blatter and adds: “When I look at what is happening in FIFA today, I would be glad if Andrew Jennings were still here.”

How to get the documents
The magazine allows not only those who knew Jennings well to reminisce but also gives new readers an opportunity to enter the intertwined worlds of Jennings and sports politics through well-written and often entertaining articles that detail some of the unbelievable stories that Jennings either uncovered himself or helped others uncover.

The magazine also contains many stories about Andrew Jennings as a man, a friend, a mentor, and above all as an uncompromising journalist that eschewed press conferences and media handouts.

His journalistic approach and methodologies are covered in several articles that focus on his insistence on getting the incriminating documents that always formed the basis of his work. And how do you do that? The magazine reprints an article that Jennings wrote for “The Global Investigative Journalism Casebook’ published by UNESCO where he explains his methods in that personal style that ruffled a fair number of feathers over the years:

“Go to a press conference chaired by Mr. Big & Nasty. Don’t dress as smartly as the press pack. Silk ties are a career killer. Be a killer. Stand up and accuse Mr. Big of whatever takes your fancy; bribe-taking, paedophilia, the list is yours to write. You are sending a message to the employees who, if Mr. Big is as big a bastard as you suspect, will be a sordid nightmare to work for. Bullying the men and feeling up the women … You are signalling that you don’t give a f… for his big b…, you only turned up because you’re looking for a fight. … If you’ve given a good performance, the documents should start to flow.”

The importance of journalism
The documents flowed in Jennings’ direction for many years where he painstakingly collected and organised them, and with great patience extracted and published stories about the bad men in sport which eventually led to the downfall of many corrupt officials in FIFA.

One of the articles in the magazine is written by special agent Steven Berryman who led the worldwide investigation by the US Department of the Treasury into tax, international money laundering, and corruption in sports governance within FIFA. For him the investigation began when he read an article by Jennings in 2011 about FIFA corruption and culminated in late May 2015 with charges and arrests of several FIFA officials in Switzerland, and in other countries in South America, Central America, and the Caribbean.

“Please know that much of this may have never come to light were it not for the tenacious and dedicated research and reporting over the decades of investigative journalists the world over, with this especially being true of the departed, but never forgotten, Andrew Jennings,” writes Berrryman.

At Play the Game 2022, Jennings as well as investigative journalism will be celebrated when conference participants are invited to “An evening out with Andrew Jennings”. Here stories about his life and career will be mixed with discussions about how investigative sports journalism can best be supported and developed in the years to come.

Read Jens Weinreich’s editorial from the magazine ‘Let’s get on with it!’