New study from the Danish Institute for Sports Studies/Play the Game shows that the mantra "if you build it, they will come" is not a valid business plan when it comes to building mega-event stadiums.

News on stadiums and arenas

More news on stadiums and arenas

The report investigates the use of mega-event stadiums from around the world covering stadiums and arenas which have been constructed or extensively renovated as a part of a mega-event during 1996-2010. It includes the Olympics, Commonwealth Games, Pan-American Games, Asian Games, All Africa Games, the FIFA World Cup (1998 excluded), UEFA European Championships and the Africa Cup of Nations.

The study has collected factual data about construction costs, capacity, cost per seat, number of spectators in 2010, ownership, and number of events in order to evaluate each stadium. The information has been gathered using internet sources, direct enquiries to the responsible parties and local informants in the different countries covered.

A more or less complete set of data has been gathered for 65 stadiums out of the 75 covered in the report. The study is therefore ongoing and contributions to the project will be very much appreciated.

Jens Alm, analyst at the Danish Institute for Sports Studies, is responsible for the study and the report.

The best and the worst

The objective of the report has been to investigate the use of the stadiums after the event to see which mega-event stadiums can be called a success and which stand empty after the event, becoming a financial burden for their owners.

The main variable in the report is thus the number of spectators per year, and by dividing the attendance figures with the capacity of the stadium, the report has created an index showing the stadium utilisation in 2010 making it possible to compare the stadiums included in the study.

The most successful stadium in the report is Atlanta’s Turner Field stadium, originally built for the 1996 Olympics. It has a capacity of almost 50,000 people and in 2010 it attracted enough spectators to fill the stadium 50 times.

At the other end of the scale we find Nagano’s stadium built for the Winter Olympics in 1998. The stadium, which seats 30,000 people only managed to attract 18,000 spectators in 2010 equal to filling the stadium 0.6 times in a year.

The 2006 FIFA World Cup in Germany is the single most successful event in the study as most of the stadiums built for the event have seen a large inflow of spectators after the World Cup.

The stadiums built or renovated for the UEFA European Championships in Portugal in 2004 have a more problematic legacy. Three of the stadiums couldn’t even fill their stands three times during 2010.

Basis for debate
By pointing out that the promised sporting legacy is not always acheived, the report seeks to egnite a debate on the thoughtless waste of resources by many host countries and cities, who forget to take local needs into account before venturing into great construction projects.

Instead they customise their stadiums according to the requirements of the major sports organisations such as the IOC, FIFA and UEFA, who on their side also need to add more importance to economic and social sustainability in their lists of requirements, states the report. 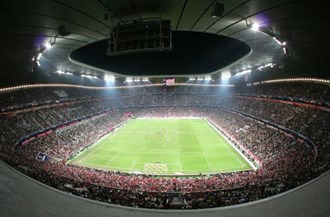 Or download the specific chapters (not available at the moment):

Contribute to the study

The study on stadiums connected to mega-events is ongoing and will keep on growing in size as more data is uncovered.

We therefore invite you to contribute to the study by adding comments, specific data or any other type of information that might be relevant.

New information will be updated and available on this website.

If you have an article or an idea for a story on mega-event stadiums, perhaps from a local perspective, that might be interesting for Play the Game to publish, feel free to send your ideas to jens.alm@idan.dk