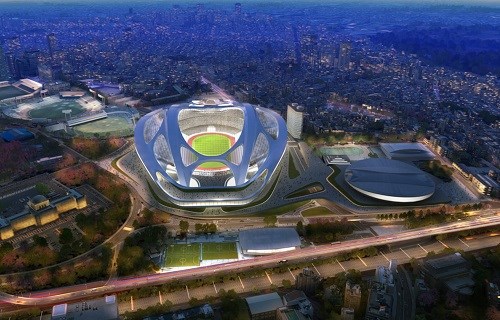 By Freelance journalist Asger Røjle Christensen , Tokyo
With the prospect of runaway expenses, the Japanese government last month pulled the brake and launched a new design contest for Tokyo’s new Olympic stadium. But the debate about who is to blame for the fiasco continues.

It would hurt the entire world’s trust in Japan if the already adopted design for the New Olympic Stadium in Tokyo was scrapped – so that was not an option. That had to be avoided at any cost.

Those were the words from the Japanese government’s spokesperson, Yoshihide Suga, at his daily press conference on 8 July this year.

Nine days later, this was exactly what his boss, Prime Minister Shinzo Abe, decided to do. With a solemn air, Abe, in an improvised press event in front of his mansion, told the public that he had decided to cut to the bone and send the vexed stadium design back to the drawing board.

”I have come to the conclusion that it will be difficult to have an Olympics that every Japanese can celebrate if we stick to the current plan,” the prime minister suddenly explained.

Time will show if this U-turn will result in the irreparable damage of Japan’s recognition that the government spokesperson warned about a few days before. So far, a big national debate has arisen in Japan over who is to blame for the gigantic fiasco of the first stadium design.

Expenses out of control
The tipping point was, mind you, not the critique that many Japanese architects aimed at the Iraqi-British architect Zaha Hadid. They called her super modernistic project a clumsy mastodon, which, in an un-Japanese manner, would be placed in the centre of downtown Tokyo neither in connection nor balance with the surrounding buildings and the green landscape. ‘Bike helmet’, ‘turtle’ and even a huge ‘vagina’ are some of the names that critics have used to describe the project.

For Shinzo Abe, the tipping point was the galloping costs of the project. Even after major cutbacks last year, which would have made the 20-storey building five metres shorter, the overall price was to be 252 billion yen or 2.1 billion dollars. Tokyo’s Olympic stadium would have been twice as expensive as the most expensive stadium in Olympic history.

Of course, there is a significant amount of national pride at stake. U-turns like this do not look pretty, and since Abe’s decision, many observers and citizens have been asking whether the Olympic organisers are capable of doing anything right at all. On the other hand, there is a broad consensus that things could have been worse if nothing had been done about the rising costs. In fact, the time that lapsed before a decision was made has been criticised more than the decision itself.

Right before he made his announcement, Shinzo Abe had a lengthy meeting with the head of the local organising committee, former Prime Minister Yoshiro Mori, who needed some convincing before agreeing to Abe’s recommendation.

It was not because Mori loved the controversial design. After it was scrapped, the always candid Mori said that he had never liked Zaha Hadid’s monumental project design and, to him, it looked like a “raw oyster”.

But Mori is also a former rugby player and the current president of the Japan Rugby Football Union. And one of the consequences of launching a new design competition for the Olympic stadium is that, contrary to what was originally planned, the new stadium will not be finished in time to host the World Rugby World Cup, which Japan will host the year before the Games, in 2019. This consequence was not easy to swallow for Mori. According to the media, it has also caused members of the International Rugby Board to believe that Japan was awarded the hosting rights on false grounds.

But the decision is made. The delay is a reality. According to the new schedule, the Olympic stadium will only be ready for the IOC three months before the opening of the Games in July 2020. Much later than usual. There will be no room for further hitches if the deadline is to be met.

The new Olympic stadium must still be able to seat 80,000 spectators, but the decision to start a new design process also includes some very tough maximum limits for how much the new stadium can cost. Among other things, the sliding roof, which formed part of the original project and which would have made it usable for concerts and other events in the future, will be cut.

Construction boom increases costs
The planning of the Games is managed by the Japan Sport Council, which operates under the Ministry of Education and which has been armed with extra personnel on loan from this ministry. Few of these employees are used to dealing with projects of this scale, and to monitor the entire process, Abe has now appointed a minister dedicated to the 2020 Games.

The Japan Sport Council recognises that one of the reasons why the stadium project price escalated is the building boom currently going on in Japan, which has resulted in higher expenses on materials as well as a serious labour shortage. That makes for one third of the explanation, says the sport council. The rest is on Zaha Hadid’s demanding design featuring two very distinct arches on the top, resembling the keel on a ship laying upside-down in the water.

The excuse given in the days following Shinzo Abe’s decision was that these two arches would be a very complex and expensive assignment for the Japanese contractors – an explanation that was uncritically cited in most Japanese media.

But after a few days, Zaha Hadid and her company retorted. She outright rejected the claim.

”These arches are not complex and use standard bridge building technology […] The design and engineering teams in Japan confirmed the arches supporting the roof should cost 23 billion yen (less than 10% of the approved budget),” says a comprehensive declaration from the London architect company, which has been released.

According to Zaha Hadid and her colleagues, the galloping costs of the stadium construction stemmed from something entirely different. Something that will not disappear by starting all over.

One thing is the elevated expenses for building material and labour supply due to the building boom – add to this the yen dropping in value, making it costly to import materials and consultants from abroad.

Another thing is the special Japanese two-stage tender process, in which the contractors are actually appointed before having made their final estimate of the total project cost. This process, according to Zaha Hadid, “dramatically reduced the competition”.

And, finally, everything had to go through the bureaucrats in the sport council and the architects were not allowed to cooperate directly with the engineers and experts from the contractors about developing more cost efficient solutions together.

Critique of a closed process and lack of competence
A bitter critique of the closed process surrounding the planning and the tendering is unfolding in Japan. Questions are being asked as to whether the old men at the top of the Japanese political and financial realms, who fill the seats of the Japan Olympic Committee, or the sport council’s bureaucrats called in for the occasion, are the right persons to manage such a big international event.

This scepticism is not only coming from bilious critics in the outskirts of the political scene. It is also being heard from Tokyo’s mayor himself, Yoichi Masuzoe.

The idea of bringing the Olympic Games to Tokyo again originally came from the Tokyo Metropolitan Government. Formally, the project is a joint venture between the national government and the Tokyo Metropolitan Government. The problem is that all of the tax revenue lies with the ministry of finance, and even before the prime minister decided to scrap the former stadium design, it was an open secret that the Tokyo mayor was furious about not knowing what was going on. He felt completely left out.

Three days after Abe’s decision, Yoichi Masuzoe wrote on his personal blog that “some politicians and other people who were involved in the contracts had discussions with the major construction companies within secret environments, in which external checks were absent. There may have been secret concessions behind closed doors..”.

He explicitly writes that “[t]he Ministry of Education is both incompetent and irresponsible, and this is the biggest cause of the failure… Since many Japan Sport Council employees are officials who have temporarily transferred over from the Ministry of Education, they cannot oppose it. If we allow these two organizations to do this work again, they will fail once again”.

Political considerations behind the decision
In Japan, the debate about the cost of the enormous Olympic stadium had become so embarrassing that the entire Olympic project was cast in an unfavourable light – in sharp contrast to the public festivities and the Olympics’ sudden popularity when Tokyo won the hosting rights only a couple of years ago.

Most observers therefore think that the prime minister’s demonstrative decision to cast the unpopular bike helmet away was based on political motives.

The Abe government, which has had nothing but favourable polls and election results during its two and a half years in power, had just bulldozed some disputed security-political laws through the Japanese lower house and was about to reopen the first nuclear reactors since the Fukushima accident in 2011.

There were enough unpopular cases on the political agenda, Abe and his advisors thought. They were afraid that the Olympic project would become even less popular if the process was allowed to continue and the large stadium to become even larger. Mega-projects that outgrow their budgets have been known to cost Japanese politicians their jobs.

So Abe had to demonstrate his resolve by making a decision, which, at least for many, is popular. As soon as he was assured that the new stadium – even with the expected delay – would be ready for the opening of the Games, he went for it.

The responsibility blame game has begun
For the Olympic Games, we must hope that these promises are upheld.

While the stadium construction starts over, there are no signs that the currently very heated debate about who is to blame for the failure of the initial project is fading out.

”Everyone just claims that they themselves are not the bad ones,” mayor Masuzoe writes on his blog.

”It’s the same system of irresponsibility like that which once characterised the Japanese Imperial Army.”

Philip Brasor, a columnist with The Japan Times, more moderately states that ”[i]f passing the buck were an Olympic event, Japan would have a lock on the gold medal..”.

Asger Røjle is an experienced Danish journalist, writer and lecturer, who is based in Tokyo most of his time.

Røjle has been following developments in Japan and East Asia for 35 years.