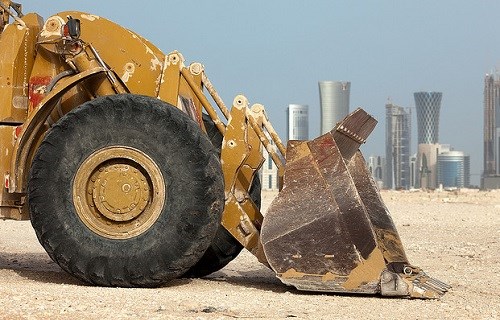 By James M. Dorsey
While stadium construction is being shelved for various political reasons in Turkey and Saudi Arabia, Qatar is moving full steam ahead with its preparations for the World Cup, including the construction of at least eight stadia that would be dismantled after the tournament.

Politics is never divorced from sports, not even when it comes to the construction of stadia. Budgets however have recently thwarted plans in Turkey and Saudi Arabia to build a host of sporting facilities in a bid to either win votes or curry favour with youth and other segments of the population.

By contrast, Qatar despite the risk of posting its first budget deficit in 15 years, is moving full steam ahead with the construction of eight stadia in an effort to demonstrate that its business as usual notwithstanding mounting threats to its hosting of the 2022 World Cup.

Budget restraints as a result of reduced economic growth and spending on the recent parliamentary election campaigns has left Turkey strewn with unfinished stadia and sporting complexes. Of the 20 stadium projects in cities across the country, only two, including Galatasaray SK's Turk Telekom Arena in Istanbul have been completed.

The other is in Mersin, one of six stadia planned in predominantly Kurdish south-eastern Turkey, the swing region in this month's election that for the first time brought a pro-Kurdish party into the Turkish parliament, stopped the ruling Justice and Development Party (AKP) from winning an absolute majority for the third time, and pre-empted Recep Tayyip Erdogan's plan to amass further power by turning his office into an executive presidency.

NTV Sport reported that most of the stadia projects were in various stages of construction ranging from two to 45 percent completion. The stadia are part of a $1.55 billion project announced in 2013 by Turkey's mass housing administration (TOKI) that also involves the construction of 1,000 sports halls and 431 sports facilities for education institutions.

John Konuk Blasing, the American-Turkish author of the thisisfootballislife blog, reported that the majority of the projects had stalled because of lack of funding or because contractors had gone bankrupt.

"In order to make it happen before the elections the government directed construction firms to work fast, promising extra payments after the elections. With money also needed to fund the campaign, however, extra money for the construction projects dried up... Votes are all that could ever be hoped to be won from such a strategy, certainly not real democracy or-evidently-new stadiums," Mr. Blasing wrote.

For very different reasons, politics has also delayed the opening of Besiktas JK's Vodafone Arena that was scheduled for mid-September. While the Istanbul municipality ordered a halt to construction on the grounds that it failed to meet the height limit of 34 meters, a fact disputed by the club, many believe that the stoppage had more to do with the independence of the club and its militant fans.

Besiktas is the only club to have funded the construction of its stadium, making it less vulnerable to the whims of the government. Meanwhile, a court is expected to rule on June 26 in the case of 35 members of Carsi, the militant support group of Besiktas that played a key role in the 2013 anti-government protests on Istanbul's Taksim square. The fans are accused of having planned to topple the government and being members of an unidentified terrorist organization.

Funding has also persuaded oil-rich Saudi Arabia to shelve plans to build eleven stadia. Hit by reduced oil prices and the cost of waging an ill-conceived war in Yemen, the government has reduced the number of planned stadia to two, one in Dammam and the other in either Mecca or Medina.

Construction of the stadia was linked to the planned privatization of the country's top 14 teams that was unlikely to move them out of the control of the ruling family and wealthy businessmen associated with it. The stadia project had been put under the supervision of state oil company Aramco that falls under the purview of King Salman's powerful son, Prince Mohammed bin Salman Abdulaziz Al Saud, who is also in charge of the Yemen campaign.

While higher than in the smaller Gulf states match attendance in the soccer-crazy kingdom averages at 36 percent.

Low attendance is not a factor in the calculations of Qatar as it monitors a US Department of Justice investigation of corruption in sport governance that could expand to the Gulf state's successful but controversial bid for the 2022 World Cup and a Swiss enquiry into the awarding to Qatar as well as Russia's winning bid for the 2018 tournament.

One of the unidentified co-conspirators in the US indictments of FIFA executives and soccer officials in the Americas is believed to be Mohammed Bin Hammam, the disgraced Qatari national who was dismissed as president of the Asian Football Confederation (AFC) and vice president of FIFA and banned for life from involvement in professional soccer on corruption charges.

A lengthy investigation by The Sunday times that involved sifting through millions of documents believed to have come from AFC servers put Mr. Bin Hammam at the centre of a multi-million dollar campaign to persuade members of FIFA's executive committee to vote in favour of Qatar. Mr. Bin Hammam has denied the allegations while Qatar's bid committee attempted to portray its ties with the Qatari national as an arms' length relationship.

The potential fallout of the latest FIFA scandal has prompted Qatar to project an image of moving full steam ahead with its preparations for the World Cup, including the construction of at least eight stadia that would be dismantled after the tournament and shipped off to less well-off countries.

Dependent for 90 percent on revenues and exports of its energy wealth, Qatar is expected to next year experience its first budget deficit in more than a decade as a result of lower oil prices. The International Monetary Fund (IMF) predicted that Qatar could be in for budget deficits for more than just a year.

"The recent events at FIFA will not impact on our preparations for the 2022 FIFA World Cup," Qatar's Supreme Committee for Delivery & Legacy said in a statement earlier this month. To make sure that doesn't happen, Qatar has hired four additional lobbying firms in Washington at a cost of $1.9 million until the end of this month alone.

The move constitutes a realization that stadium construction as part of a business as usual approach is unlikely to solve Qatar's problems that involve an image tarnished in part by its failure to act forcefully on promised improvement of the conditions of migrant labour in the country. Neither are recent libel suits against a right-wing French politician and a former FIFA executive committee member who employed strong language to bolster their criticism of the Gulf state. The establishment of a government communications office may help provided it is backed up by the implementation of promised reforms and policies.

The FIFA scandal "is going to make (the consultants') work a lot harder, they need to do something. At some point, you have to start pushing your client (to be better). That's the idea of public diplomacy. But sometimes you can't talk sense" into the client, The Hill, a newsletter covering Capitol Hill, quoted a lobbying source as saying.

James M. Dorsey is a senior fellow at the S. Rajaratnam School of International Studies as Nanyang Technological University in Singapore, co-director of the Institute of Fan Culture of the University of Würzburg and the author of the blog, The Turbulent World of Middle East Soccer, and a forthcoming book with the same title.