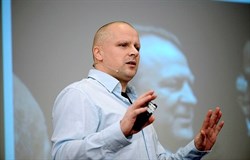 Jens Weinreich has a proven track record of investigating corruption and crime in the Olympic world for more than 25 years. He has published a first book on the shadow business of the International Olympic Committee in 1996, and a well-received book on corruption in FIFA in 1998. More than a decade before it became en vogue to criticise FIFA this was groundbreaking work, always in close cooperation with the British journalist Andrew Jennings.

Weinreich's experience in IOC's olympic kingdom is unparalleld among active journalists, not only has he revealed numerous scandals but also has he covered 37 IOC sessions. His most important investigations include the detection of the ISL bribery scandal, the hitherto largest corruption system in the olympic world (involved senior officials of IOC, FIFA, IAAF, AIBA and other federations), and the story how Germany has bought the right to host the FIFA World Cup 2006. The latter was a story of the year in Germany and created a kind of an earthquake in the football system, it lead to the resignation of the president of the football federation, the public fall of Germany's national icon Beckenbauer, and to criminal and tax investigations and trials in several countries.

Weinreich has worked for all kind of media outlets (TV, radio, newspapers, magazines, books, his own blog and podcast). Currently he is working as a freelance, mainly for DER SPIEGEL but focused on his own investigative magazine 'SPORT & POLITICS' (https://www.jensweinreich.de/shop/) and blog.

He has covered three dozen of the biggest international sporting events including 12 Olympic Games, World Championships in Athletics, Swimming and the FIFA World Cup. He has covered all Olympic bid competitions since 1991 – the bidding process and the question how to finance the Games and the Olympic movement has always been in the center of his work.

In 2005 he received the “Waechterpreis” for investigative journalism for investigations on the financial scandals during the Leipzig bid for the Olympic Games 2012.

In 2009 Weinreich received the prestigious “Grimme Online Award” for the new level of sport political coverage he has created on his blog “Sport and Politics”.

In 2011 he received the “Play the Game Award” together with Andrew Jennings for outstanding investigations on FIFA crime over almost two decades. Said the jury: “Jennings and Weinreich have been despised, criticized and excluded from doing their job by sports leaders, politicians, and even by their own colleagues. Still, they have been determined in pursuing their investigations. They not only sought, but also found the documentation, and that is a great achievement which has been fundamental for the world public’s understanding of FIFA as it is today.”

In 2015 he revealed – together with journalists from DER SPIEGEL – how Germany has become the host of FIFA’s World Cup 2006. Investigations of tax and criminal authorities are ongoing and focused on Germany’s football icon Franz Beckenbauer. The investigation team received the most prestigious journalistic award in 2016: the “Nannen Preis” for their exclusive stories that shook the German Football Federation DFB.

1996 „Muskelspiele“, Rowohlt Berlin Verlag, with T. Kistner. The book investigates the obscure backgrounds of some of the IOC`s leading figures, their alliances and secret deals which inevitably led to the sell-out of Olympic ideals and values.

1998 „Das Milliardenspiel“, Fischer Taschenbuch Verlag, with T. Kistner. This report on soccer, the billion-dollar-game, focusses on the kind of policy FIFA adopted under the presidency of Joao Havelange and his successor Joseph Blatter. It examines the circumstances under which media-tycoon Leo Kirch secured the TV-rights to broadcast the word championships and explains why Nike is able to command Ronaldo and the Brazilian squad.

2000 „Der olympische Sumpf - die Machenschaften des IOC“, Piper Verlag, with T. Kistner. The Salt Lake City scandal disclosed widespread corruption within the IOC, yet some questions remain which are discussed in this report: How did Sydney get the games? Is the president of the IOC a member of the secret catholic sect Opus Dei? What kind of contact is there between IOC members, bosses of the world boxing federation AIBA and alleged members of the Russian mafia?

2001 Editions of “Der olympische Sumpf” in France and Croatia

2004 “Operation 2012 - Leipzigs deutscher Olympiatrip”, Forum Verlag Leipzig, with G. Hartmann and C. Jeske This book discovers the financial scandals and obscure backgrounds of the Leipzig bid for the Olympic Games 2012.

2006 „Korruption im Sport“, Forum Verlag Leipzig. A compendium of 24 authors from a dozen countries. A basic work on corruption in the olympic business.

2014 “Macht, Moneten, Marionetten”, a worldwide unique e-book on the olympic business. 575 pages with hundreds of tables, charts and graphics.

1995 “Deutsche Doping Republik”, ORB, 45 minutes: Documentary which reports backgrounds of the east german doping system and the destinies of athletes.

2004 “The Untouchable”, 57 minutes: Portrait and reportage of FIFA President Joseph Blatter and his politics. Part of a 4-part-series investigating the business and politics in international football, produced by Swedish and Danish Broadcasting Corporations SVT and DR1, broadcasted in appr. 15 countries.

2011 “Olympiapoker”, ARD/WDR, 45 minutes: A documentary on the Olympic bid 2018 and the competition between PyeongChang, Munich and Annecy.

2018 “Das System Olympia – Geld, Gier und Macht“, ZDF, 29 Minutes. A documentary on some of the ongoing criminal cases and procedures in the Olympic movement – including the criminal investigations in Brazil (Rio 2016) and France (IAAF, Qatar 2022, Tokyo 2020). With M. Harm.